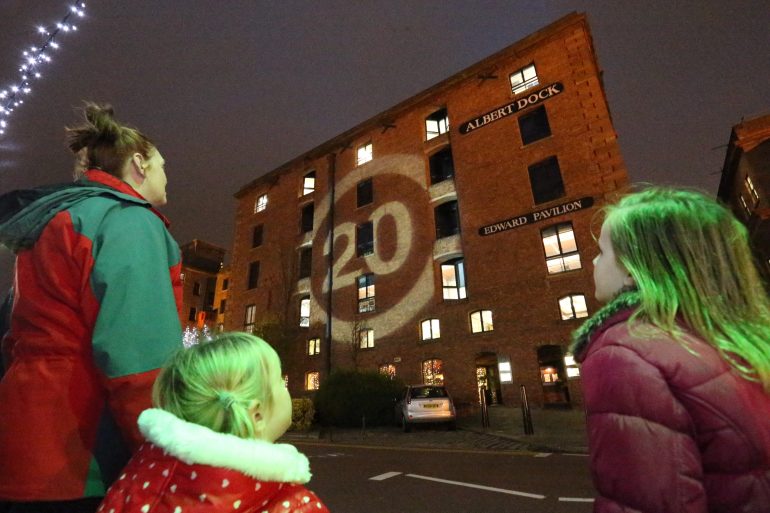 A giant 20mph road sign is being projected onto the city’s famous Albert Dock in order to draw attention to the 20 Effect, Liverpool’s speed reduction programme, during National Road Safety week 2014.

National Road Safety Week is an annual road safety campaign coordinated by the road safety charity Brake which each year has a different theme. The theme for this year’s week-long campaign is look out for each other.

The 20 effect is a city wide speed reduction programme implemented by Liverpool City Council in partnership with Merseyside Police and Merseyside Fire & Rescue Service which aims to reduce speed limits to 20mph on residential roads. So far, in areas surveyed in Liverpool, over 90% of residents have indicated support for 20mph speed limits where they live. If this trend continues then the speed limit will be lowered on 70 per cent of the city’s streets.

The programme, which started in 2012 is funded by Liverpool City Council and is designed to reduce the frequency and severity of road traffic collisions.

Liverpool City Council’s cabinet member for Transport and Regeneration, Councillor Malcolm Kennedy said: “We wanted to create something which simply and effectively communicated the campaign to passers-by. The Albert Dock is one of the city’s most famous buildings and they have been kind enough to help us get this important message out to the people of the city.

“National Road Safety Week arrives at a significant time of year with the dark evenings and few hours of daylight. We hope this projection will stick in the minds of the city’s motorists, pedestrians and cyclists and remind everybody to look out for each other.”

Later in the week, the 20 effect projection team will move to FACT on Bold Street with a new installation from 5pm and hold a drivers’ education session on Lavender Way, Walton from 10am.

The 20 Effect’s method of undertaking extensive grassroots community engagement has ensured that the introduction of 20mph limits has been driven by the local population. This model for effective delivery has been recognised nationally as an effective way of working, with other cities in the UK looking to Liverpool for advice in order to inform their own slower speed programmes.

Information on National Road Safety Week is available at http://http://www.roadsafetyweek.org.uk/