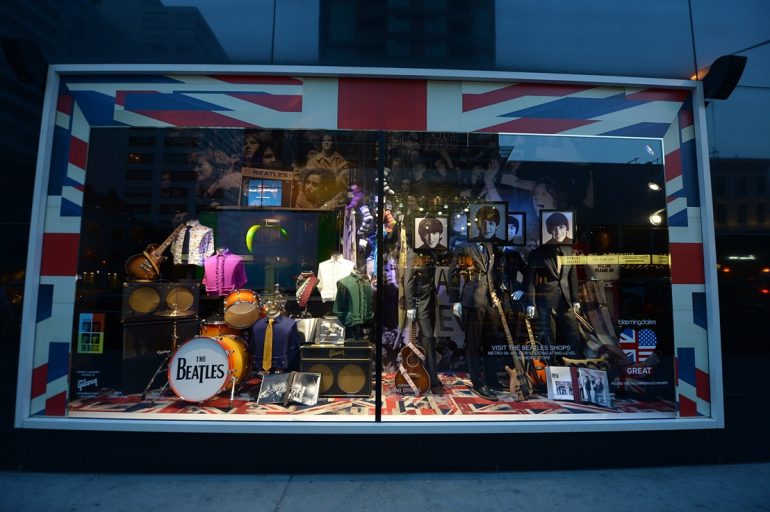 Another No.1 for Liverpool and The Beatles

The city that gave the world The Beatles is part of the Bloomingdale’s Loves Great Britain celebration, hosted by America’s only nationwide department store.

Liverpool is also featured as one of four custom British travel packages being offered to Bloomingdales shoppers as part of a unique partnership between the retailer and VisitBritain, the UK’s national tourist authority..

VisitLiverpool and the City’s film office co-ordinated and hosted Bloomingdale’s location work earlier this summer. The results can be seen at Bloomingdales.com/brit

Pam Wilsher, Head of Visitor Economy Development at the City Region’s Tourist Board said: “There’s only one place in the world where this could happen – and it’s Liverpool.”

She added: “This is a massive coast to coast campaign in one of the most important markets for our Visitor Economy. As well as a strong presence in stores, there’s also a huge social media campaign. Together these initiatives give Liverpool and the Beatles’ legacy in the city massive profile in this 50th anniversary year.”

Tourist Board Members including Hard Days Night Hotel, The Cavern Club and The Beatles Story assisted in the shoot.

Cllr Wendy Simon, Liverpool City Council Cabinet Member for Culture and Tourism, said: “To be the focus of a campaign for such an iconic American brand as Bloomingdales is fantastic for Liverpool.

“Our Film Office worked hard, along with VisitLiverpool, to showcase the best of the city and as a result it looks stunning in the photos, which will be a great boost for the city and will hopefully entice visitors to come and see the sights in the flesh!”

The campaign marks a collaboration between the US giant and VisitBritain, and features a range of UK designer fashion labels.

Joss Croft, VisitBritain’s Marketing Director said: “The US is the most important long haul market we have, so teaming up with world famous store Bloomingdale’s to help showcase the very best of Britain is a major coup.

“An integral part of this partnership has seen Bloomingdale’s shooting images across Liverpool for their highly anticipated Autumn catalogues, which have been sent out to over 1.2 million customers. We’re hoping this helps inspire many more Americans to choose Britain for their next trip abroad and encourages them to come and experience all of what Liverpool has to offer for themselves.”