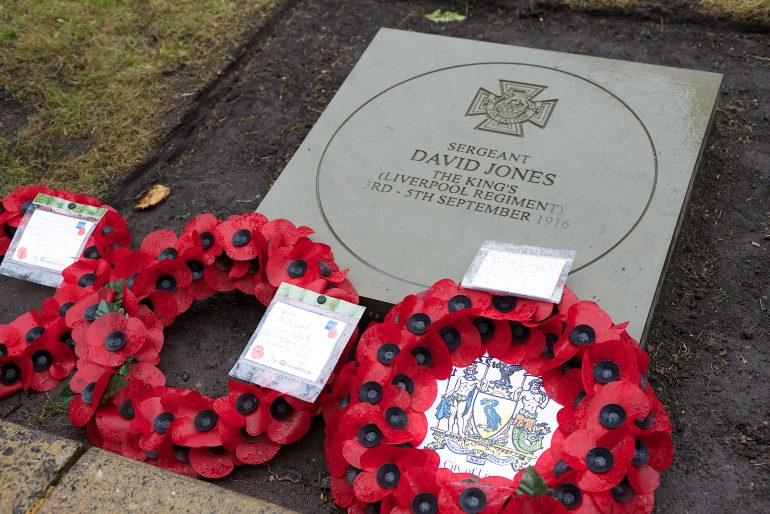 A memorial stone has been unveiled in honour of a Liverpool soldier who was awarded the Victoria Cross after he displayed “most conspicuous bravery”.

Sergeant David Jones was awarded the honour for his actions at Guillimont in the Battle of the Somme on 3 September 1916.

The citation for his award read:

“For most conspicuous bravery, devotion to duty, and ability displayed in the handling of his platoon.

“The platoon to which he belonged was ordered to a forward position, and during the advance came under heavy machine gun fire, the officer being killed and the platoon suffering heavy losses. Sergeant Jones led forward the remainder, occupied the position, and held it for two days and two nights without food or water, until relieved. On the second day he drove back three counter-attacks, inflicting heavy losses. His coolness was most praiseworthy.”

His widow was presented with his VC at Buckingham Palace by King George V in March 1917.

David Jones was born in Hutchinson Street in 1891.He attended Heyworth Street School and before the outbreak of war worked as an apprentice coachbuilder with J. Blake and Co Motor Company.

A memorial stone in his honour was unveiled by the Lord Mayor of Liverpool, Councillor Roz Gladden, on Saturday 3 September  at Whitley Gardens, Shaw Street next to the memorial to the 8th The King’s Regiment.

Members of Sgt Jones’ family and military representatives were present at the ceremony.

The memorial stones are a national scheme run by the Department for Communities and Local Government which will see every World War One Victoria Cross recipient remembered.

Councilor Gladden said: “This is the second memorial stone which was unveiled in matter of weeks for Liverpool men who were awarded VCs at the Battle of the Somme which illustrates not only their outstanding bravery but the terrible toll that battle took.

“David Jones was an extremely brave young man. A newspaper report of the time described him as ‘one of those quiet and unassuming men who, under the test of exceptional circumstances, reveal a gift of leadership and an almost unsuspected courage’.

“I am extremely pleased to unveil a memorial in his home city which will ensure that his bravery and sacrifice is recognised.”

Sgt Jones’ VC is housed at the Museum of Liverpool and members of his family were invited to view it.