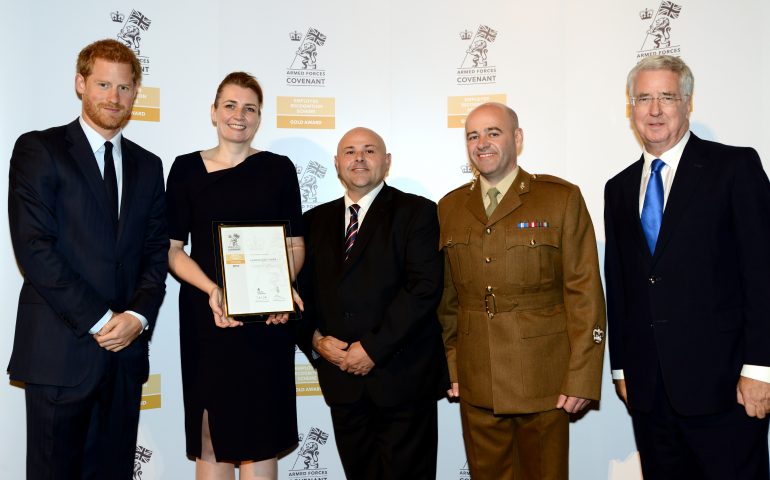 Liverpool City Council’s work to support armed forces personnel has been given the Royal seal of approval.

The council was presented with a Defence Employer Recognition Scheme Gold award by HRH Prince Harry and Defence Secretary Sir Michael Fallon, at a special ceremony at the Imperial War Museum on 9 October.

The award is the Ministry of Defence’s prestigious badge of honour for organisations who have demonstrated outstanding support for the Armed Forces community.
HRH Prince Harry thanked this year’s winners and heard about successful initiatives providing veterans with a fair chance of starting a second career in diverse industries following military service.

As an employer, Liverpool City Council is committed to employing people who have served their country, offering a guaranteed interview scheme for applicants who meet a post’s essential criteria. Staff who are reservists receive ten additional days of paid leave for training and unlimited unpaid leave if they are mobilised. This year, the council extended the additional paid leave entitlement to volunteers involved with cadets. The council was also the key partner when the city hosted National Armed Forces Day in June.

The council also works in partnership with other organisations including the military to offer employment events.

Sir Michael Fallon said: “This year’s Gold award winners should be extremely proud of the work they are doing to live up to the Armed Forces Covenant pledge and to promote the pledge to others.

“I’m delighted to recognise employers who make it crystal clear that regardless of size, location, or sector, employing people with military skills is good for business. I hope others follow their example, thereby delivering a better deal for veterans and armed forces families.”

Councillor Ian Francis, Armed Forces Champion for Liverpool, said: “Our Armed Forces make tremendous sacrifices to keep us all safe and it is absolutely vital that we do all we can to help them re-enter civilian life and make the best decisions.

“Liverpool has a long and proud tradition of supporting the services and being Armed Forces friendly has enabled us to drive forward a number of different projects.

“We were proud to be the national host city Armed Forces Day this year and our work with partners across the city is making sure that when people leave service they’ve got all the support they need to find a home, get a job and keep well.”