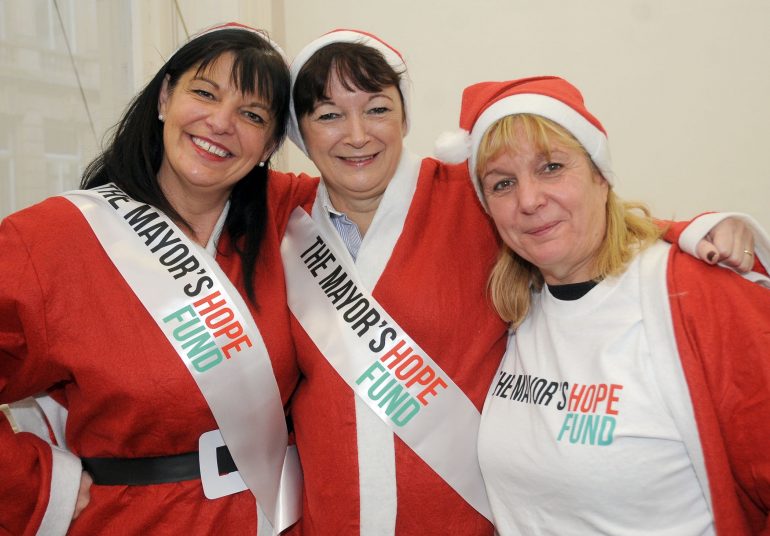 Liverpool’s political leaders are gearing up for the Santa Dash this weekend to raise money for foodbanks in the city.

They are raising money for the Mayor’s Hope Fund, a new charity for poverty relief set up by the Mayor of Liverpool, Joe Anderson. It is identifying specific projects to implement, enhance and grow the level of service that each foodbank can provide. The money will be used to create storage space and distribution centres, recruit and train volunteer and collect and deliver food.

Mayor Joe Anderson said: “I am delighted that so many of my team are taking part in the Santa Dash to raise money for the Mayor’s Hope Fund.

“We have had a great response to the charity since it was launched last week. It is providing a huge boost for foodbanks, enabling them to invest in their infrastructure to meet the increasing need for their services.”

People can show their support by making an online donation at http://www.justgiving.com/Santa-Dash1, and also donate to the Mayor’s Hope Fund in the following ways:

Direct: At the 28 Tesco stores in Liverpool by scanning a special donation barcode available in store

For more information about The Mayor’s Hope Fund, visit http://themayorshopefund.org.uk

The Mayor’s Hope Fund is a registered charity in England and Wales (1153630).

For more information about the Santa Dash, visit http://www.btrliverpool.com/event/santa-dash/