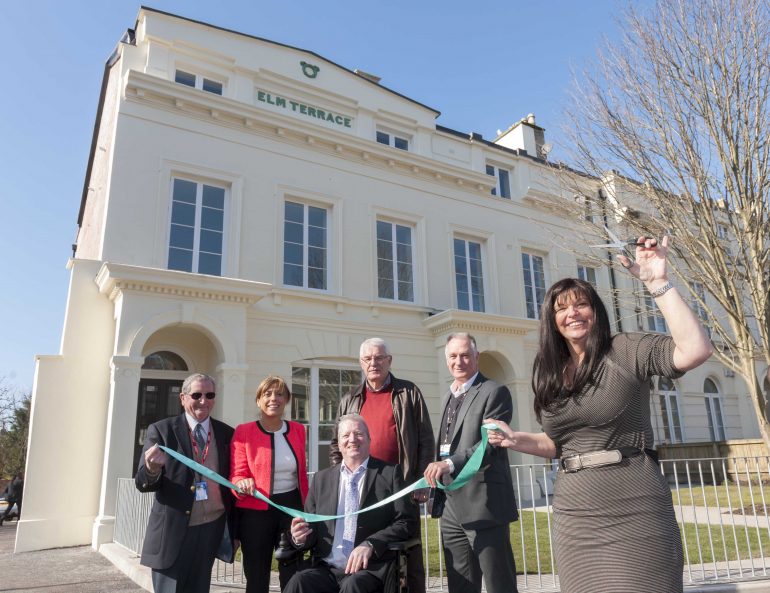 Cllr O'Byrne joins representatives from Riverside and Frank Rogers for the official re-opening of the townhouses.
March 14, 2014 2 min read

Two listed buildings in Liverpool have been saved from dereliction and restored to their former glory by social landlord Riverside.

The empty Grade II townhouses in Elm Terrace, Kensington, had fallen into a state of severe disrepair, suffering from fire damage, rot and dilapidation. They had also become a target for anti-social behaviour in the area, as well as being used by rough sleepers.

Now, the one million pound regeneration scheme has not only preserved the historic integrity of the 1840s buildings, but has used a combination of heritage-based renovation and modern building techniques to convert the space into nine one-bedroomed apartments for affordable rent.

One of the two houses – in the Kensington Conservation Area – has been completely refurbished, and the other, which was so severely damaged only its facade remained, has been rebuilt with the front retained to preserve its historic character. Traditional materials such as ‘Roman Cement’ were used on the facades, and as many original features of the building were preserved as possible – while also attaining high standards of modern living.

Justin Gore, Riverside Development Manager, said: “This has been a key project for us, and part of a wider programme of regeneration in the area. We have been able to not only bring empty buildings back into use and remove blight, but have also ensured these historic buildings are preserved.”

Liverpool City Council’s Cabinet Member for Housing, Councillor Ann O’Byrne, said: “This is a fantastic scheme which has breathed new life into these historic townhouses. This investment means a bright future for the buildings, and I’m looking forward to them providing happy, affordable homes for local people.”

Dave Lindeman, of Frank Rogers, added: “This was a challenging and very rewarding project to be involved in. We’ve managed to retain some of the original features of the buildings – such as architectural plaster covings and features to the entrance hallway and stair well – and have also used original techniques to restore features which would have otherwise been lost.”

The new apartments will provide much-needed affordable rented homes in the area, and will also help address the shortage of smaller properties needed in the light of the Under-Occupation Penalty, also known as the Bedroom Tax.

Working closely with Liverpool City Council’s Planning & Conservation teams, the Elm Terrace scheme was planned and carried out in partnership with local firm Frank Rogers, who specialise in restoring historic buildings, The work was carried out using a 100% local workforce.

Riverside invited key partners to celebrate the completion of the Elm Terrace project at a ribbon-cutting ceremony at the site.

Image: Cllr O’Byrne joins representatives from Riverside and Frank Rogers for the official re-opening of the townhouses.