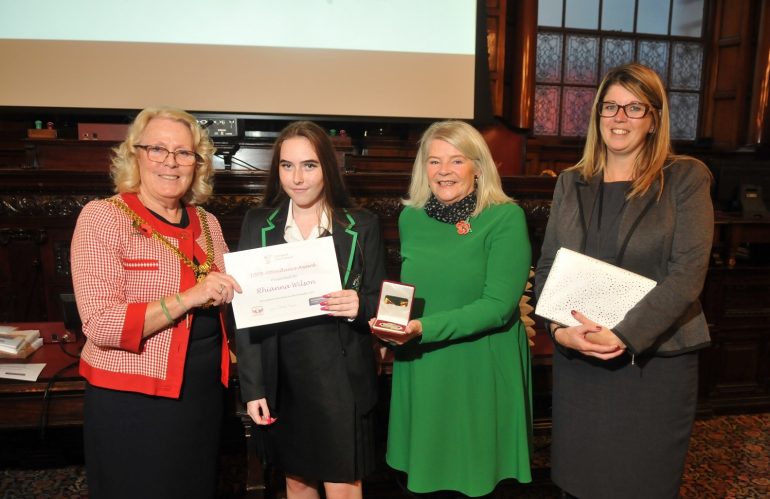 A sixth-form pupil who has never missed a day of school is among those presented with awards for exceptional attendance at Liverpool Town Hall.

Part funded by the Families Programme, but organised by Liverpool Learning Partnership and School Improvement Liverpool, the Annual Attendance Awards aim to celebrate dedication and commitment.

She said: “I’ve been really lucky in that I’ve always been healthy, although there was one time in year nine when I refused to go home even though I’d been sick in the dinner hall at lunchtime and was begging teachers to let me stay!

“I also remember when I finished primary school my mum organised a party for me to celebrate me not having a day off. It’s really nice to be rewarded but I don’t really see it as any big deal.”

Rhianna is studying A-level maths, physics and performing arts, and has ambitions to be a maths teacher after going to university.

She is one of two pupils who were rewarded for not missing a day at both primary and secondary school. They received an ipad for their outstanding achievements, along with a certificate and specially engraved medal.

Another 29 pupils from 19 schools across Liverpool were rewarded for not missing a day of education during their time at either their primary or secondary school. They received a Kindle, a certificate and medal.

A further 42 pupils from 20 schools received certificates and awards for making huge strides forward with their attendance.

Councillor Barbara Murray, Cabinet member for education, said: “All the evidence that we have is that the better attendance that a pupil has, the better their chances of getting good exam results and going on to have a successful career.

“Good attendance and punctuality create reliability which leads to trust in that person, which are great characteristics to have acknowledged at a young age.

“Imagine a world in which a surgeon didn’t turn up because it was their birthday; a building burning down because the fire crew didn’t turn in or someone dying because the ambulance driver was late for their shift. Good attendance at school creates a habit that lasts a lifetime and is a characteristic that employers look for.

“We recognise that there will always be legitimate reasons for pupils to have time off school, such as illness or hospital appointments, but we have too many students still persistently absent without good reason and we need to demonstrate the value that attending school brings.”

Elaine Rees, Chief Executive of Liverpool Learning Partnership, said: “We were delighted to award more pupils than ever before at this, the third Annual Attendance Awards. All the pupils and parents should be proud of their achievements.

“As a city we have real challenges over attendance and punctuality and we all need to work together to address this. The event proves that you can improve attendance and it’s right that we acknowledge the hard work of schools, parents and children in making this happen.”

The schools with pupils that had 100 percent attendance are: