Giant location is a work of art 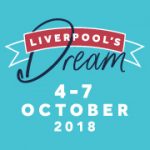 Stunning artwork has been unveiled which reveals one of the locations involved in the brand new Giant spectacular heading to Liverpool and Wirral in October.

New Brighton Lighthouse features on a brand new design created by Liverpool artist Alice Duke, confirming that a Giant visitor is expected to explore parts of Wirral for a day, with the lighthouse being included on the route.

As well as the Wirral location, organisers can also announce that Princes Park will feature as part of the show, with some very special activities planned for the green space. Both locations will feature on Friday 5 October.

Liverpool’s Dream takes place from Thursday 4 to Sunday 7 October, and will see Nantes-based Royal de Luxe bring their unforgettable street theatre event to the city for the third time. As usual, the French team are keen to keep an air of mystery around the event, so although two of the locations have been revealed, the full route and the specifics around which Giants are coming, is going to be kept under wraps for some time.

Alice worked on the last Giants event back in 2014 and is delighted to be back on the team four years later:

“After making work for the 2014 campaign it was an honour to be invited back to create a piece of artwork to promote the 2018 visitation. Seeing the Giants is always magical and surreal; I think the way Perch Rock Lighthouse emerges from the sea and sand matches that perfectly. It was a beautiful location to research and paint, and will be a wonderful place to see the Giants.”

Councillor Phil Davies, Leader of Wirral Council, said: “I am thrilled we are bringing the Giants to Wirral. It will be a truly spectacular event, and I hope as many people as possible get a chance to see and experience them on our side of the Mersey for the first time, and make memories that will last a lifetime. Like many Wirral residents, I have seen the Giants in Liverpool before and I know just how special they are.

“Working with colleagues from across the Liverpool City Region to bring huge events like the Giants to our shores is exactly the kind of thing we should be doing. These events attract thousands of visitors, boosting local businesses and creating jobs. Coming so soon after the hugely successful return of the Tall Ships, we are delighted that our Imagine Wirral programme is delivering everything we promised.”

Deputy Mayor and cabinet member for culture, tourism and events, Councillor Wendy Simon, said: “We had such an incredible response when we announced the return of the Giants and we know people are eager to know as much as possible about what is going to happen in October.

“Thanks to the beautiful piece of art created by Alice, we can reveal a bit more information about the locations involved. The New Brighton Lighthouse will be a stunning backdrop for the event and it’s really exciting that Wirral is going to provide a whole new playground for our visitors to explore.

“In the next four months we’ll be making more announcements around what Liverpool’s Dream has in store for the hundreds of thousands of visitors we’re expecting to head to the region in October.”

The event is one of the major highlights of the Liverpool 2018 programme – a year-long celebration which marks a decade since the city held the game-changing title of European Capital of Culture. The Liverpool City Region Combined Authority is supporting several highlight Liverpool 2018 events with £5 million from the Single Investment Fund (SIF).

The event has been made possible thanks to support from the Liverpool City Region Combined Authority and Arts Council England.

Steve Rotheram, Metro Mayor of Liverpool City Region, said: “The last time the Giants visited Liverpool they attracted a million people and boosted our economy by nearly £50 million.  It is very exciting that this third instalment of the story will also include the Wirral and I am sure that the hundreds of thousands of people who visit will see what the wider city region has to offer as a visitor destination.  That’s why we’ve invested £5million into the 2018 cultural programme.”

Any businesses interested in sponsorship opportunities should email Giant.Spectacular@liverpool.gov.uk.