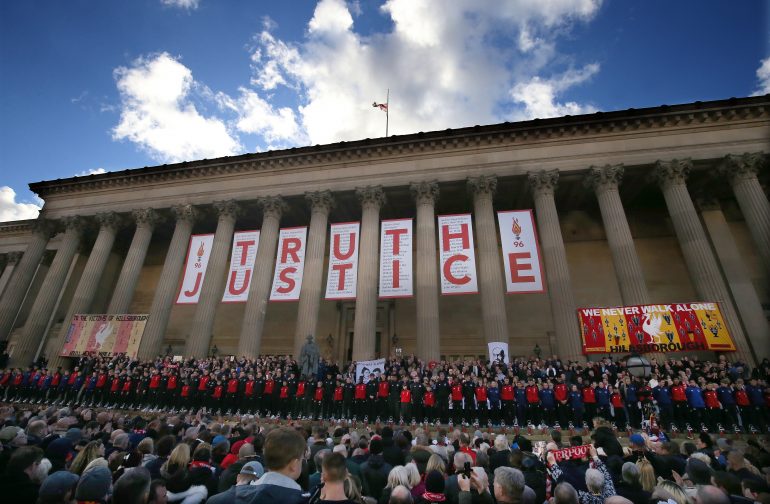 Liverpool is to award the Freedom of the City to key figures involved in the 27 year Hillsborough campaign.

And, for the first time ever, Liverpool will also award the Freedom of the City posthumously – with the honour going to each of the 96 people who died at Sheffield Wednesday’s ground on 15 April 1989.

The city’s highest civic honour will also be presented to people who have helped play a pivotal role in the fight for truth, which culminated last month in an inquest jury concluding that the 96 who died were unlawfully killed.

In addition to the 96, the Freedom of the City will be awarded to the following individuals:

The Right Reverend James Jones – the now retired former Bishop of Liverpool who chaired the Hillsborough Independent Panel whose report led to the quashing of the inquest verdicts and the launch of criminal investigations. In addition to his role in Hillsborough, he gave 15 years dedicated services to the city as Bishop and acted in a pastoral role as a vocal campaigner and champion on the injustices of poverty in Liverpool.

Professor Phil Scraton – a longstanding campaigner and supporter of the Hillsborough families, Professor Scraton led the Hillsborough Independent Panel’s research team. His book, Hillsborough: The Truth, first published in 1999, is widely accepted as the definitive account of the disaster.

Kenny and Marina Dalglish – Kenny Dalglish was Liverpool FC’s manager at the time of the tragedy and, together with his wife Marina, represented the football club at many of the funerals of those who died and have had close contact with the Hillsborough families ever since. In addition, the couple set up the Marina Dalglish Appeal in 2005 after Marina’s successful treatment for breast cancer, and have so far raised millions of pounds for treatment of the disease in the city.

Mayor of Liverpool Joe Anderson said: “The fight for truth and justice over the last 27 years has involved many people, not least the families of the 96 who we honoured with the Freedom of the City back in 2009.

“Today we are announcing that we want to bestow the honour on those who died, together with a number of people who have played a pivotal role over many, many years – not just in the Hillsborough campaign, but who, through their actions, have enhanced the life of the city as well.

“It has needed tremendous diligence and persistence to demolish the wall of lies that was cruelly created by the establishment to deflect blame for the tragedy away from those that were really responsible.

“The individuals we will be honouring have played a crucial role in righting of the biggest wrongs seen in recent British history.

“We are also, in truly exceptional circumstances, posthumously awarding the Freedom of the City to the 96 innocent people who the whole world now knows paid the ultimate price for the failings and actions of others, and who have been disgracefully smeared over many years.”

The city council will also be presenting the ‘Citizen of Honour’ award to a number of other people who played an important role in the Hillsborough campaign. Consultation is to take place with the Hillsborough families over proposed recipients, and a full announcement will be made in due course.

In another first, each of the people who receive Freedom of the City and Citizen of Honour, along with the families of the 96, will also receive a specially commissioned medal together with the traditional scroll.

Mayor Anderson added: “All Freedoms are special, but given the appalling stain the lies about Hillsborough left on the city, we wanted to give every recipient a special civic medal to mark their heroic involvement in what we know is the country’s worst ever miscarriage of justice.”

Lord Mayor of Liverpool, Councillor Tony Concepcion, said: “The campaign for truth has been a long and difficult struggle and has succeeded, in part, thanks to the determination and support of the people we are honouring.

“It is right and proper that, on behalf of the city, we convey and formally record our thanks for doing an incredible job in uncovering the evidence necessary to get to the truth and clearing Liverpool fans of any wrongdoing.”

Margaret Aspinall CBE, Chair of the Hillsborough Family Support Group, welcomed the decision. She said: “I am absolutely delighted that the city has chosen to honour the 96 in this way as it is a wonderful tribute to their memory.

“I couldn’t be any more thrilled that Bishop James, Phil Scraton and Kenny and Marina are also being recognised as they have all given fantastic support to the families in their own special way over the years and they thoroughly deserve this honour.”

A council meeting will be held in the near future to formalise the decision to confer the honours, with the ceremony taking place at St George’s Hall later this year.