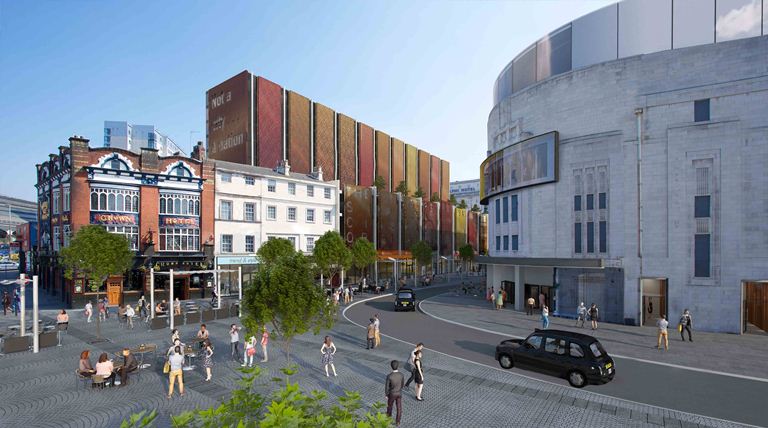 Radically revised plans for the regeneration of one of Liverpool’s most famous streets have been revealed by Neptune, working with Liverpool City Council.

The bold new vision for the East side of Lime St has been designed following consultation on an earlier scheme in April of this year.

The redesign addresses many of the concerns and suggestions aired during the consultation period.

Steve Parry, Managing Director of Neptune Developments explained: “The consultation has been very helpful. It has given us a chance to re-think the project in a wider context that looks at Lime Street’s history and its future within a rapidly changing and dynamic city centre. The new design is more urban, more visually dramatic and more integrated. It’s very much part of an emerging vision for the whole of Lime Street and its surrounding area.”

The redesign re-introduces the existing block pattern of the Eastside of Lime Street with imaginative metal panels that give distinctive personality to each block and can be dramatically back-lit at night. In addition to the radically redesigned buildings, incorporating hotel, shops, restaurants and student accommodation, the scheme canvasses longer term ideas for Lime Street including the potential semi-pedestrianisation of the area between the Crown and Vine pubs. It has still not been possible to save the facade of the Futurist cinema within the new scheme because of its poor structural condition.

Another key element of the vision is a proposal to create an entirely new kind of entertainment and media hub in the restored ABC cinema. The listed Art Deco building has been vacant for nearly two decades but is set to become both a major live music venue and a studio for the production and broadcast of international TV programmes. The complex will house, TV production facilities, 3 restaurants, a coffee shop and basement cocktail bar as well as a performance auditorium and 2 TV studios. One of the core ideas underpinning the business plan for the venue is a new live TV music and chat show from Liverpool with a transatlantic link-up to New York.

The vision is the brainchild of Liverpool music entrepreneur Mark Cowley. He explained: “We have been working for over a year on the project and have already had massive interest and support from leading media companies, collaborators and promoters. This is a fantastic building and has all the versatility and space we need, for what will be a unique media and performance destination.”

Mayor of Liverpool Joe Anderson said: “Lime Street is one of the major gateways into and out of the city and has been neglected for far too long. It is crucial that any scheme is ambitious and creates the best possible first impression of the city. I am pleased that the architects have listened to the feedback from the consultation and created something that I believe will make this part of Liverpool vibrant and exciting.”

The revised plans for the Eastside of Lime Street will now go forward for consideration by Liverpool City Council’s Planning Committee before the end of July, with further public consultation taking place until the 23rd of July.

Neptune and Regeneration Liverpool will be launching an on-line consultation portal early next week where more information and images are available and people and groups can comment on the new designs from Monday only at www.limestreetfuture.com

Lead Architect for the scheme Matt Brook from Broadway Malyan is keen for people to take part in the consultation.

“Liverpool people are passionate about their city as evidenced by the debate about the previous scheme. That dialogue has helped shape the new design and we are keen to keep the conversation open over the next few weeks.”