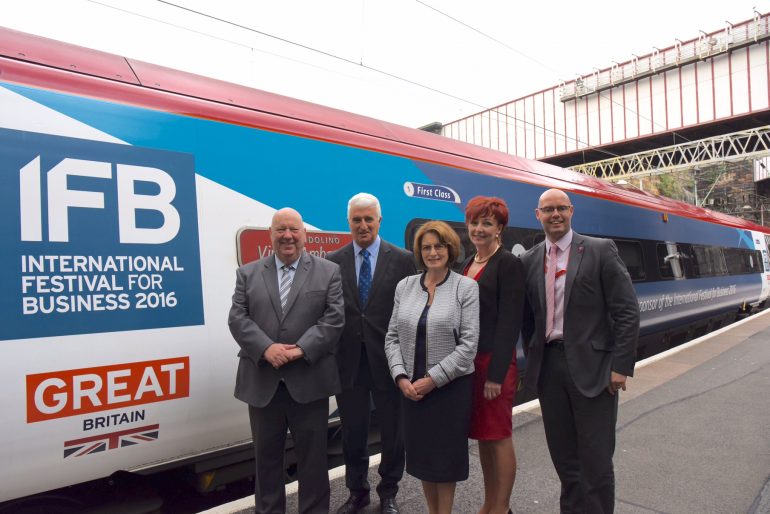 Mayor of Liverpool, Joe Anderson and Louise Ellman MP, were joined by Max Steinberg, Chair of the International Festival for Business 2016 and Gary Iddon, General Manager for  Virgin Trains at Liverpool Lime Street station on platform 7, 13:21 on 24 July to welcome the ‘IFB Ambassador’ branded Pendolino train into the city for the first time.

As one of the festival’s founding supporters, Virgin Trains in collaboration with IFB will help to carry the festival’s message to business passengers between Liverpool and London. Virgin Trains is also supporting Accelerate 2015, which takes place on Friday 9 October 2015 at ACC Liverpool. www.accelerate-britain.co.uk

Mayor of Liverpool Joe Anderson said: “I am delighted that Virgin Trains has come on board as a partner for IFB 2016 given their important role in connecting Liverpool with the rest of the country.

“Their sponsorship is particularly fitting as many of the delegates attending the festival will be coming by rail, and the branded Pendolino is a colourful and striking way of promoting the event.

“IFB 2016 is already on course to be a huge success, raising Liverpool’s profile globally and brokering deals that will sustain and create a substantial number of jobs both in and beyond the City Region.”

A central meeting point for the world’s business community, IFB 2016 offers an unrivalled platform for companies to meet international peers and great business thinkers, to explore new export opportunities and grow their global network. Held at the new Exhibition Centre Liverpool (ECL) from 13 June to 1 July 2016, IFB presents a biennial opportunity for businesses of every size to expand their horizons: offering new ideas, opening up new markets and making deals.

Max Steinberg, Chair of IFB 2016, said: Providing such an important strategic link for businessmen and women travelling between London and Liverpool, I am very pleased that we can count Virgin Trains amongst our sponsors.

The IFB Ambassador train with its distinctively branded livery will serve as a daily reminder to the many thousands of passengers making this journey about the festival and play a valuable role in spreading the message to a wider business community.”

Rail passengers will be able to catch a glimpse of the ‘IFB Virgin Trains Pendolino’ as it speeds its way up and down the West Coast Main Line at 125mph helping to showcase the event not only in Liverpool and London but also Manchester, Glasgow, Edinburgh and the West Midlands.

This latest initiative builds on Virgin Trains partnership with Business is GREAT Britain, the Government’s business support campaign which showcases a range of help for businesses looking to start, grow and export. To find out more about Business is GREAT visit www.greatbusiness.gov.uk

In addition to Virgin Trains range of popular advanced fares, IFB’s Business Club Members travelling between Liverpool and London (and the destinations in between) to attend the festival can also take advantage of a 20% discount on rail travel, details of which will be announced next year.

Gary Iddon, General Manager Virgin Trains said: “We’re delighted to support next year’s International Festival of Business which is sure to  be a fantastic showcase for all Liverpool and the wider region has to offer. It is a city we have been proud to serve for the best part of twenty years and look forward to welcoming those attending the event on-board. Rail travel is increasingly the first choice of the business community and we are committed to working closely with them to make our service even better.”