The tournament – launched to mark the 25th anniversary of Hillsborough – brings together under-13s from secondary schools from across the city, to raise awareness among young people about the tragedy and celebrate the city’s footballing heritage. 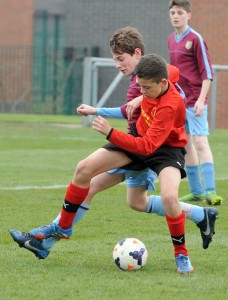 And in a special surprise for the youngsters, Reds full-back Jon Flanagan arrived at Liverpool Soccer Centre, to catch some of the action, before joining the Mayor to hand out the trophies.

Mayor Anderson said: “We will never forget those who lost their lives at Hillsborough, or the impact the disaster has had on all those who knew and loved them. As we approach the 25th anniversary of the disaster, it’s more important than ever that we continue to show our support for the families and their long fight for justice.

“The Hillsborough Memorial Cup and Plate is a fitting way of honouring the 96, and reinforcing our commitment to standing together as a city to remember them. It’s also a really effective way of educating our younger generation about the tragedy.

“The event was a massive success, made even better for the young people by Jon Flanagan’s visit. I’m looking forward to this tournament going from strength to strength in the future, as an on-going, living memorial to Hillsborough.”

The tournament is backed by representatives of the families and Liverpool and Everton Football Clubs.